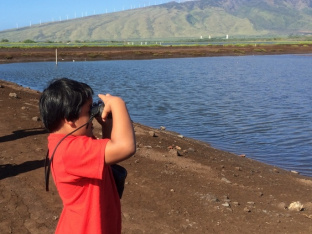 Established in 1992, Keālia Pond National Wildlife Refuge encompasses approximately 700 acres and is one of the few natural wetlands remaining in the Hawaiian Islands. Located along the south-central coast of the island of Maui, between the towns of Kīhei and Mā‘alaea, it is a natural basin for a 56-square mile watershed from the West Maui Mountains.

The Keālia Coastal Boardwalk is a beautiful tranquil walkway and bird sanctuary, beside Maʻalaeʻa Bay on the south edge of Maui's central valley. A walk on the boardwalk takes you through ancient wetlands where you can watch two of Hawaiʻi's native and endangered waterbirds - the ‘alae ke‘oke‘o (Hawaiian coot) and ae‘o (Hawaiian stilt). Across the highway you can see Keālia Pond where waterfowl from Asia and North America come for rest and warmer climate, including northern shoveler and northern pintail. The Pacific golden plover migrates from Alaska, and other birds that come for the winter are the wandering tattler and ruddy turnstone. Keālia Pond is valuable for providing nesting, feeding and resting habitat. More than 1,079 ae‘o and 584 ‘alae ke‘oke‘o have been observed here at one time.